As air rifle enthusiasts, we know power matters and we also know that air pistols don’t always bring the heat.  That’s not true with the guns on this list!  We’ve put together our recommendations on ten powerful air pistols that really bring the heat.  These guns are great fun for plinking, but they also have the velocity and range for accurate target shooting and even small game hunting.

There are a lot of considerations including cost, ammunition, and propellent when selecting an air pistol.  So, we’ve done all the work to help you make an informed decision about the right pellet gun to meet your needs.

Just as when you are purchasing any new gear, there are a few things that you need to consider when looking for a powerful air pistol.

Propellant. What will be your best option for the velocity you need?

If you want a powerful air pistol, you’ll need to consider the propellant. There are several options that you can choose from, such as a hand pump or CO2. Each system has its pros and cons.

Hand pumps can store a powerful charge and you’ll never run out of propellant (as long as your hand doesn’t get tired!). However, you may need to pump the pistol multiple times to achieve the desired velocity.

CO2 powered pistols offer their users the ability to shoot multiple times without having to recharge their pistol. However, once they run out, you will need to replace the canister, which might become expensive depending on how often you use your pistol.

A more recent entry in the air gun arms race is pre-charged pneumatic (PCP) which uses a built in compressed air tank.  The tanks can hold a large charge indefinitely, allowing for ample power and extended use without pumping or refilling.  Downsides can include cost and the need for special pumps to refill the tanks.

Caliber. What kind of pellety should you use.

There are two available pellet sizes .22 Cal and .177 Cal.  The most commonly used pellet is .177 Cal.  It is extremely versatile and comes in a wide range of shapes, weights, and materials for different uses.  Frequently used in target shooting competitions, it is an inexpensive choice for plinking and can be effective on small game.  Check out our .177 pellet ratings here.  Many .177 air pistols will also accept standard 4.5 mm BBs as well.

.22 Cal pellets have significantly more mass than .177 Cal which makes them an excellent choice for hunting and longer range shooting.

Single Shot or Multiple Shot Capacity. How many shots do you need to take quickly?

This is more a personal preference than anything else.  Single shot air pistols tend to have higher velocity and better accuracy, although PCP models can be an exception to this.  If you are a person who wants to fire at targets rapidly, you may want a pistol that has high capacity and the ability to shoot in automatic or semi-automatic mode. 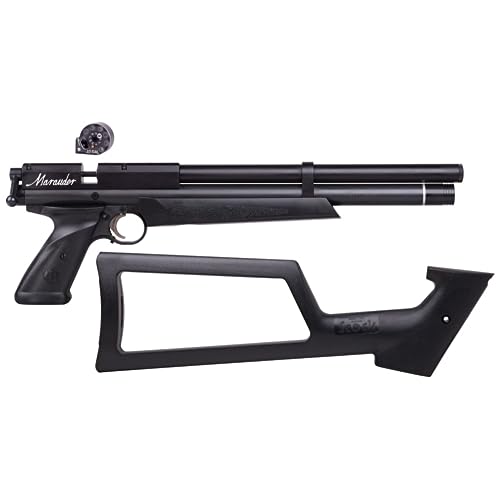 Of all of those tested, this one was by far the most powerful air pistol.  Although one of the more expensive guns, the value for performance is still great.  It shoots .22 caliber pellets, which gives it great knock-down power.  This is a top pick for hunting and it is a fantastic long range target gun too.

In testing, it was found to shoot up to 700 fps, which is the fastest of any of the pistols that were tested. So not only does it shoot a large caliber pellet, but it also shoots it at a high velocity.

It also comes with a detachable stock, which would allow the user to shoot with greater accuracy and comfort. It was found that the pistol could accurately shoot up to 30 yards.

The Marauder comes with an eight clip magazine. The pellets are fed into the barrel using a bolt action mechanism. The pistol can be charged up to 3000 psi for extended use; this is done by using the attached hand pump, which will take the user a few minutes or about 40 pumps.

Summary: While this was the most expensive pistol that we tested, it definitely delivers. It shoots a large caliber pellet with high velocity and is accurate out to 30 yards. It comes with a detachable stock and magazine and can be charged with a hand pump which will hold a charge for several shots. This is a high-quality air pistol that we highly recommend. 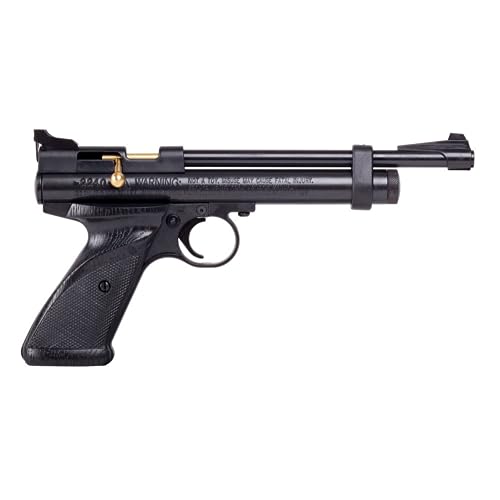 While this pistol does not have quite as much power as some of the others tested, it makes up for that in its other high-quality features. It operates with a bolt action and shoots .22 caliber pellets, which still provides good knock-down power.

Unlike the two other pistols featured here, this one uses CO2 cartridges as a propellant; this has some distinct advantages and disadvantages. It provides the user with a more carefree experience, as you will not have to pump the pistol to shoot it. On the other hand, however, you will eventually run out of CO2, which means you’ll have to have some spares on hand.

This pistol is also a bit smaller than the other pistols, which would make it ideal for backpacking. The small size would fit into your gear easily and would certainly not weigh you down.

Finally, it is much cheaper than the Marauder, so it might make for a more enticing option for someone just getting started using an air pistol.

Summary: While not as powerful fps wise as some of the other pistols tested, it still uses .22 caliber pellets, which would give plenty of knock-down power. It is also relatively cheap, accurate, and uses CO2 cartridges instead of a hand pump to propel its ammunition. This could be seen as a help or a hindrance, depending upon the users. 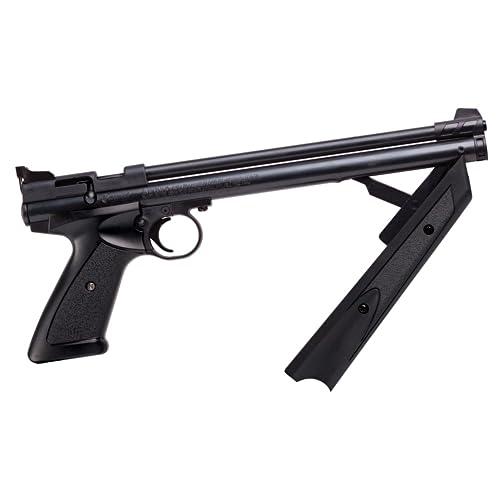 This is the cheapest option out of our top three pistols. However, even though it is on the cheaper side, it impressed us with its performance. It is able to shoot up to 600 fps, all while using a hand pump propellant system.

While it shoots at an impressive velocity, it lacks in knock-down power, as it only uses .177 caliber pellets. It might not be enough if you are hoping to use it for hunting larger game.

Summary: This is a quality pistol, which can shoot at a high velocity and comes at an extremely affordable price. However, its smaller caliber pellet will not have as much knockdown power as the other two pistols we tested.